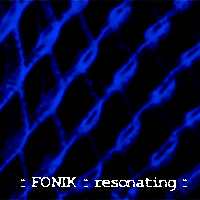 Formed in 1999 as a duo, Fonik (originally Psychiatric Challenge) became a quartet in 2001. Working essentially with free improvisation / experimental noise using prepared guitars and electronics, pieces were recorded live in whatever location was possible at the time.

In 2006 Fonik became a core duo again with an even more uncompromising approach, blurring the boundary between music, noise and art.

Performances are generally as a duo but occasionally as a trio or quartet depending on situation / availability of the ‘occasional contributors’ listed below. The duo’s background is varied coming from jazz, avant garde, post rock, industrial and new music with many years of playing and performance hours between them.

Material recorded is occasionally reworked with various sound editing techniques bringing a completely new angle to the material. It’s kind of a combination of traditional improvisation techniques combined with diy technology. These reworks are done in real-time, this becoming an improvisation in itself, with parameters being tweaked as and when required.

Recently Fonik have presented the films ‘Nosferatu’ and ‘Das Kabinet’ providing a live improvised soundtrack (Manchester’s’ Green Room completely sold out) and are currently working on a re-edit of ‘Metropolis’ for 2008. Nosferatu with 5 accompanying soundtracks will soon be available on DVD from Electronic Musik.

Fonik are also making appearances as part of Manchester musicians collective ‘Gnod’. Gnod’s line-up shrinks and swells as the music rotates & expands to reach new frontiers and quite possibly other worlds.

Ian runs the Electronic Musik CDr label which has an equally uncompromising approach in choice of releases.